How to Keep Score 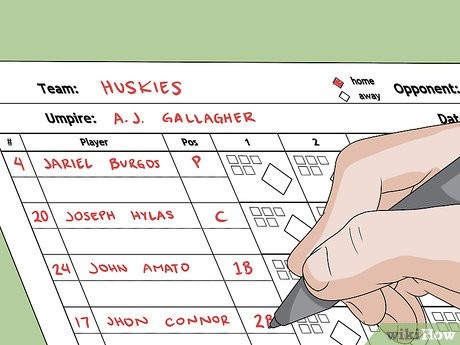 Have you ever tried scoring a baseball game with a paper and pencil? This age-old tradition can be traced back to the origins of baseball and can also be an extremely fun way to get more involved in the game.

If you’ve seen fans keeping score by hand and find the whole process wildly confusing, don’t worry! Scoring a baseball game is incredibly easy, but it is precise. We put together a handy little baseball scoring reference sheet to help you get started. Virtually everything you need to do to keep score at a baseball game can be found in these brief and succinct guided steps.

1. Learn the Code of Baseball Scoring

Baseball scoring features a shorthand code of sorts that was developed to make scoring a little bit easier at baseball games. Between sipping beer and getting very physically involved in cheering for your team, it would be an inconvenience to have to writer out a tone of different words. Luckily, this baseball score code is extremely easy to remember. If you’re not a fan of it, you can easily make your own code for scoring baseball. Regardless, the standard method is as follows.

Position numbers are assigned to each position. These specific numbers are to be used when writing down fielding plays.

When a batter is up against a pitcher, you’ll want to keep track of what he does. This shorthand is commonly used for marking pitch results.

2. Begin Keeping Score of the Game

Now that your card is ready and you’ve memorized the proper shorthand, it’s time to start keeping score of the game! n your scorecard, each player has their own row of little squares with diamonds in the center. These little squares are used to keep track of the batter’s progress throughout the game.

If a batter happens to hit a single, you will write 1B on the outside of the diamond (typically in the bottom right corner) and darken the straight line from first base to second base with your pencil. You’ll continue to do this until the runner reaches home base.

If a batter happens to strike out, you will write a K in the center of the diamond. If that batter happened to be the first out, you would write the number 1 with a circle around it in the bottom left corner of the square next to the diamond. For all outs that occur after, you would use this same formula. If the batter happens to make an out after hitting the ball, you’ll need to record how the play occurred. For example, say a player hit a grounder and the pitcher ended up fielding it and throwing it to the first base. This out would be recorded by writing something like “1-3” in the center of the diamond. This numerology will indicate that the pitcher fielded the ball first before throwing it to first base.

Now, we need to figure out how to record double plays. If a player (let’s called him Bob) is at first base after hitting a single, the scorecard for Bob will simply have 1B in the bottom right corner and a darkened line to first base. Now, another batter (let’s call him John) comes up to bat and ends up hitting a grounder to the shortstop. The shortstop throws the ball to second, getting John out. We’ll need to record that Bob got out at second base on a grounder by John. We’ll do this by writing John’s jersey number next to the line that got Bob out.

On John’s row, one would write the fielding sequence within the diamond. In this case, it would be 6-4-2. A 2 with a circle around it would go in the bottom left corner, signifying that he was the second out. About the numbers, you would write DP to indicate the double play John caused.

If a batter happens to fly out, you will write F plus the jersey number of the fielder who caught the ball. If a runner gets tagged or forced out, make sure to draw a line halfway to the base they were aiming for.

And that is the basics of scoring!